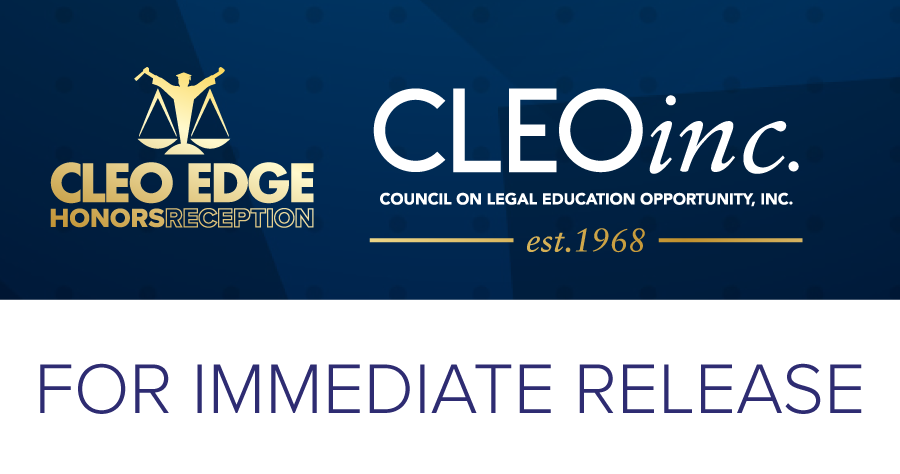 Alexandria, Virginia, September 10, 2021—The Council on Legal Education Opportunity, Inc. (CLEO) has opened its call for nominations for the CLEO EDGE Awards for its 53rd Anniversary. The CLEO EDGE Honors Reception will be held virtually on Thursday, November 18, 2021, beginning at 6:00pm ET. The reception will recognize and honor a total of three individuals, law schools, and/or legal organizations that have made significant accomplishments or demonstrated commitments to Education, Diversity, or Greater Equality in the legal profession.  Information and photos from past EDGE Awards celebrations can be found here: https://cleoinc.org/edgeawards/ or https://cleoinc.org/edgeawards/honorees/

The CLEO EDGE Vernon E. Jordan, Jr. Heritage Award will also be given to a person who has demonstrated exemplary leadership in Education, Diversity, and/or Greater Equality in both the legal profession and society.  Attorney and civil rights icon, Vernon E. Jordan, Jr., received the inaugural CLEO EDGE Heritage Award during the organization’s 50th Anniversary Gala in 2018.

“For 53 years and counting, CLEO has championed education, diversity, and equality in the legal profession. Regardless of the challenges humanity faces, both domestically and abroad, we mustn’t ever lose sight of the fact that ‘diverse advocacy matters!’” said Leigh Allen II, Interim Chief Executive Officer.  “On Thursday, November 18th, we very much look forward to publicly acknowledging the efforts of a select few individuals and entities who have made, and continue to make, positive contributions to the profession in one of these critically-important areas during our 3rd annual CLEO EDGE Honors Reception.”

The CLEO EDGE Awards were created in 2018 during CLEO’s 50th Anniversary to shine a spotlight on individuals, law schools, and other legal entities in the following categories: Education, Diversity, or Greater Equality.  To be considered for an award, the nominator (or nominee themselves) must complete the online application, which can be found at https://cleoinc.org/edgeawards/nominations/. Additional application materials, such as: letter(s) of support explaining how the nominee fulfills the various criteria, resumes, listing of previous awards/certificates, may be uploaded, but are not required. Please note that nominations will be accepted until September 24, 2021.

About the Council on Legal Education Opportunity, Inc. (CLEO)

CLEO, Inc. is a 501(c)(3) charitable organization whose mission is to inspire, motivate, and prepare students from underrepresented communities to succeed in law school and beyond. Founded in 1968, when the number of lawyers of color was less than one percent, CLEO has since had more than 25,000 high school, college prelaw, and law students participate in its programs with more than 46 percent becoming members of the legal profession.  CLEO alumni have excelled in every area of the legal profession to include judges, corporate attorneys, law school deans and professors, practitioners, politicians, and more. More information about CLEO and its programs can be found at https://cleoinc.org.